The Finnish Asko has a moto and a motto. Harley and Murphy. For the adage of Asko the rider, uttered in all occasion, is nothing but the Laws of Infernal Dynamics : « Shits happens ». The law of maximum shitty problems, the worst is always certain, if anything can go wrong, be sure that it will go wrong. For someone working in the nuclear industry as a repair officer, either it’s a leitmotiv that forces him to never lower his guard and be ultra careful , either his optimist neurons have already been burnt out by the radiations.

In fact, Asko is an inventor, since for each of his Murphy’s Law eructation (Edward A. Murphy JR: an aeronautic engineer born in New-Jersey who worked on critical systems and tested human resistance to deceleration in the 40’s), he cannot help but add: « for each problem, there is a solution ». Little time needed indeed to notice that the biker is crazy about optimization. In a sisyphean three step pas-de-deux (two forward, one backward, « well, how can we, how can we… »), he’s always trying to block ahead the coprophile law which, in his opinion, rules the world. He’s a Gyro Gearloose, gently mocking and full of tricks. But if his temperament, very north-american on this point, constantly leads him to observe things in another way in order to develop, improve, maximalize his domotic well-being (in this instance, his housing is a moto seat, a tent or a control cabin where he likes to arrive early before the colleagues), his Finnish heart will always beat so that his findings can be useful for his outdoor explorations, for his love of natural landscapes, of a retired life in the woods, for the cumulation of arctic road trips, of a good life lead in solitude, as well as surrounded with dear people. Something which might in fact relate him to the great north Canadian trapper.

Before I met Asko, a few weeks ago in Alta after having reached Nordkapp, the ambivalence of my position towards motorbike drivers was as large as their shifty personality. For the two-wheel machine cavalier seems sometimes to me the illegitimate offspring of a car driver that would have played boutefeu with a cyclist. Having given up the cozy passager compartment of the car, he affronts without intermediary the elements, just as the practitioner of the pedal, a state of fact that oblige him to get equipped so that he can resist wind, rains, snow or sun, with which he is in direct contact and from which he feels much more the powers than the regular car driver. But, just like the motionless car driver on his gaz filled motor is a spectator of the effects of those on the cabin, he disposes of horsepowers able to propulse him through them, without any great physical efforts, with a well placed accelerator hit, with a nicely handled drive stick; and thus does he, with flexibility and elegance (one must reckon that there is a particular subtle swing in the roadholding and the art of piloting), sway and bend, right and left, up and down, sticking to the asphalt, like a diamond on a vinyl following reliefs, emitting resembling popping noises. Sometimes alone, often in a group, and regularly with a passenger slightly elevated on the rear sit, just like a young koala, a monkey or a human child, quietly holding their genitor.
He seems to have though an acute awareness, sensation of his moving through the environment than the driver, but he’s very far from the self-propelled action which makes of bipedic agent’s motion in the landscape, of the walker-runner-cyclist in other words, the empirical absolute contrary of the soft-but state of being, he who looks at the landscapes that move around him, without effectuation of any per se initiated motion. A cow though would see him moving in the space of her own landscape, suspended in a seated position, a foot longer than the other one, an arm on the side, would the car turn to invisibility. But let’s not add Einstein to Murphy. Relative relativeness of big shitty troubles is another vast topic of conversation.

When Asko, about to leave, saw that I was being held at Alta’s camping waiting for a credit card which met loads of difficulties in being delivered, he looked at me with his white bear full heart eyes, with a lit glance, his motorbike loaded with the multitude of gadgets and hand made tricks, armed with his joyful demonstrations, a jumble he was delighted already at the idea of testing in an upcoming mountain climb, before he would go back to his country, machine decorated with a reindeer antler. It would be kept for me, until the day I’d come again in Finland and meet him. In his wooden hut, he said to me in the midst of the thousand of anecdotes he’s able to tell non-stop and laughing in a nearly logical order, between two curry chicken wings perfectly cooked, savored in a precise minute timing so that he can observe the setting of the sun at the horizon. He looked at me, with a small gesture inviting me to come nearer, and then the whole kindness and tenderness of that big bearded man always forgetting the coffee filter in the machine (no doubt there is no optimization in throwing it. In fact, it’s useful for the person coming next, getting a free second time brewed coffee) weighted heavier than the ton of scrap iron and equipment on which he just contents himself with watching the landscapes move around him, pushing with his big toe in his boot.

« – So, you’re here, penniless ?
– Yeah, you know: shits happens.
– Ok (he opens his wallet), here is all I’ve got, consider this my contribution to your adventure.
– Asko?
– Yep?
– There is a solution to every problem!
And then, there are fantastic motorcyclists. 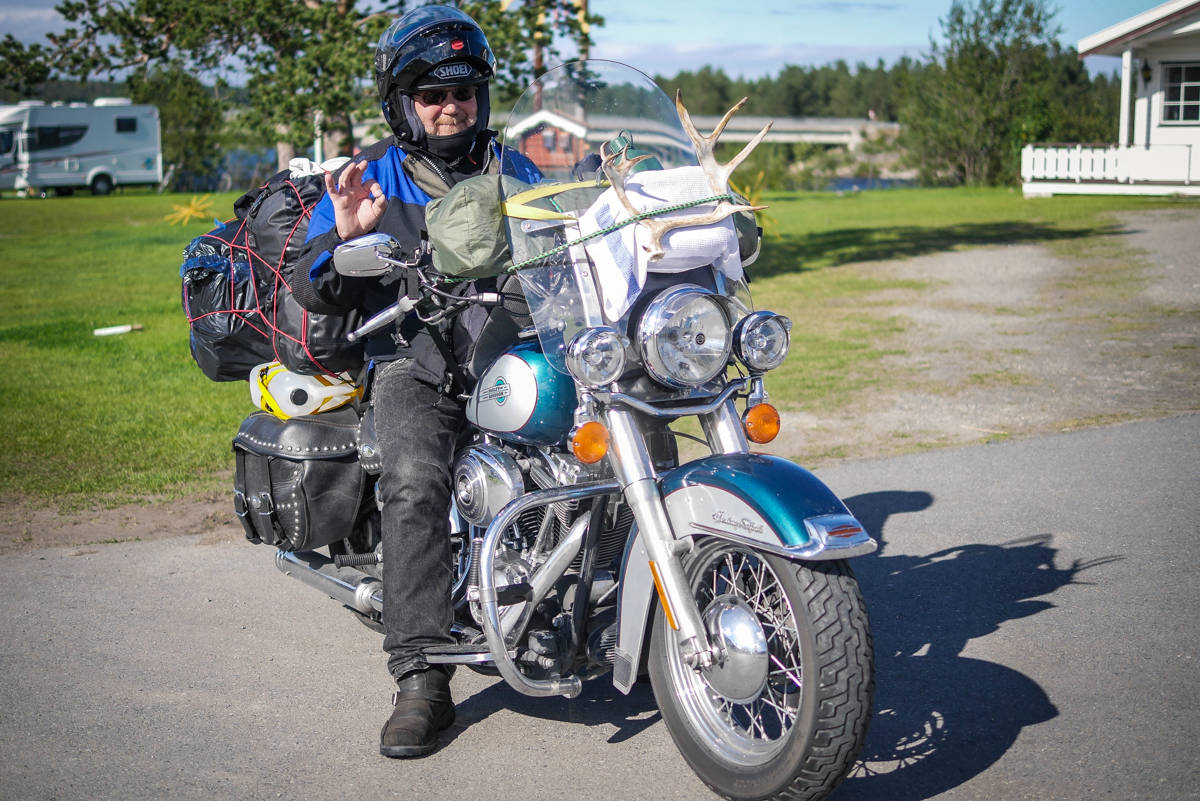 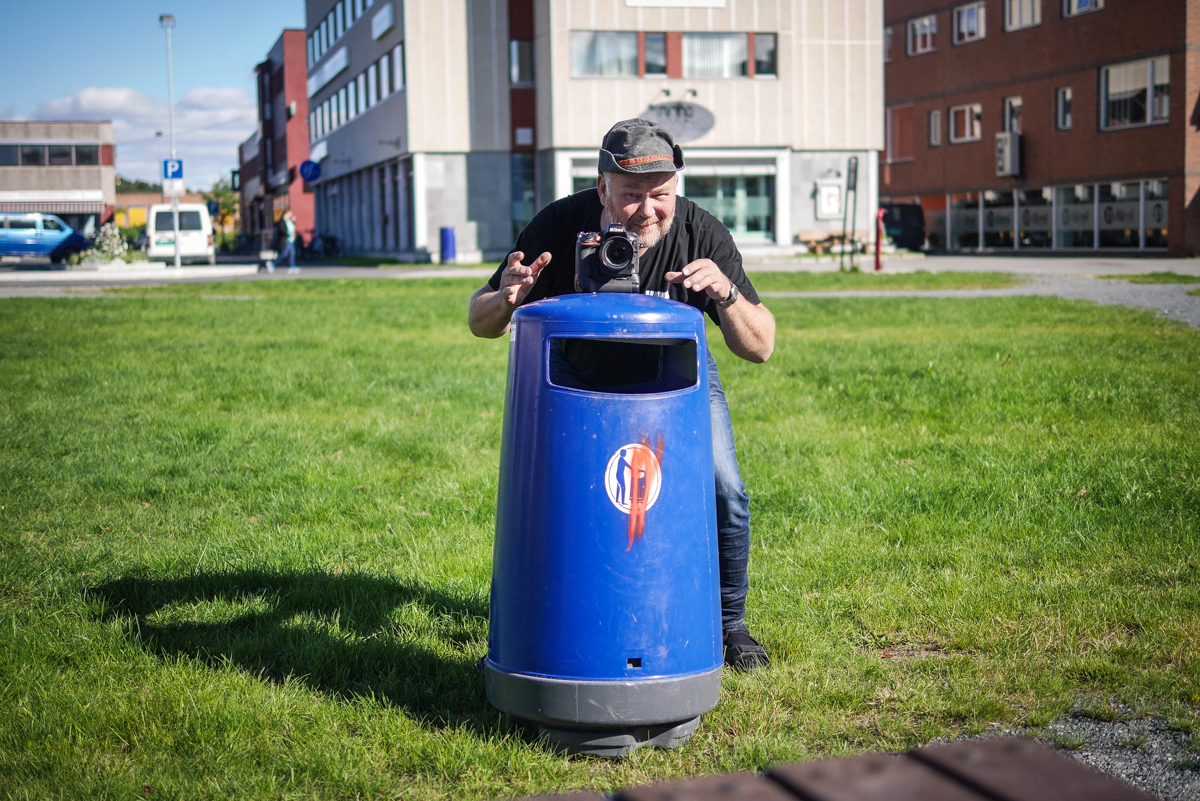 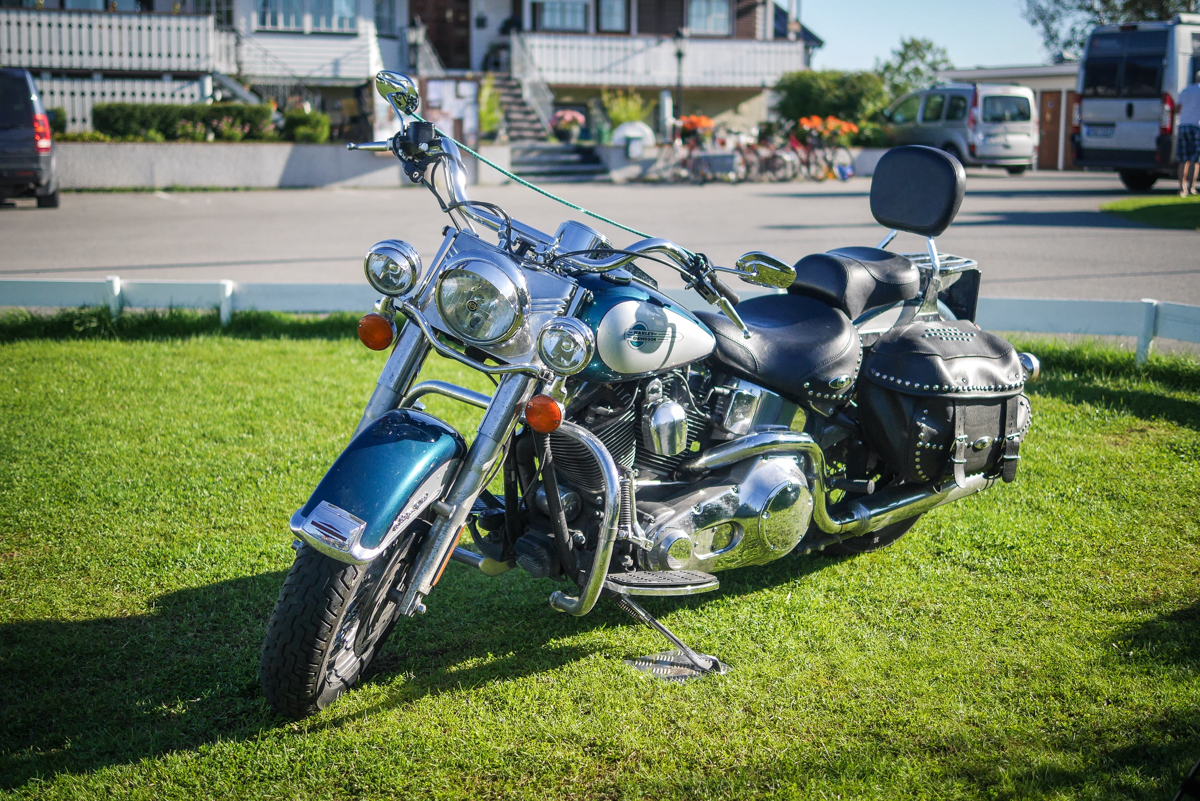 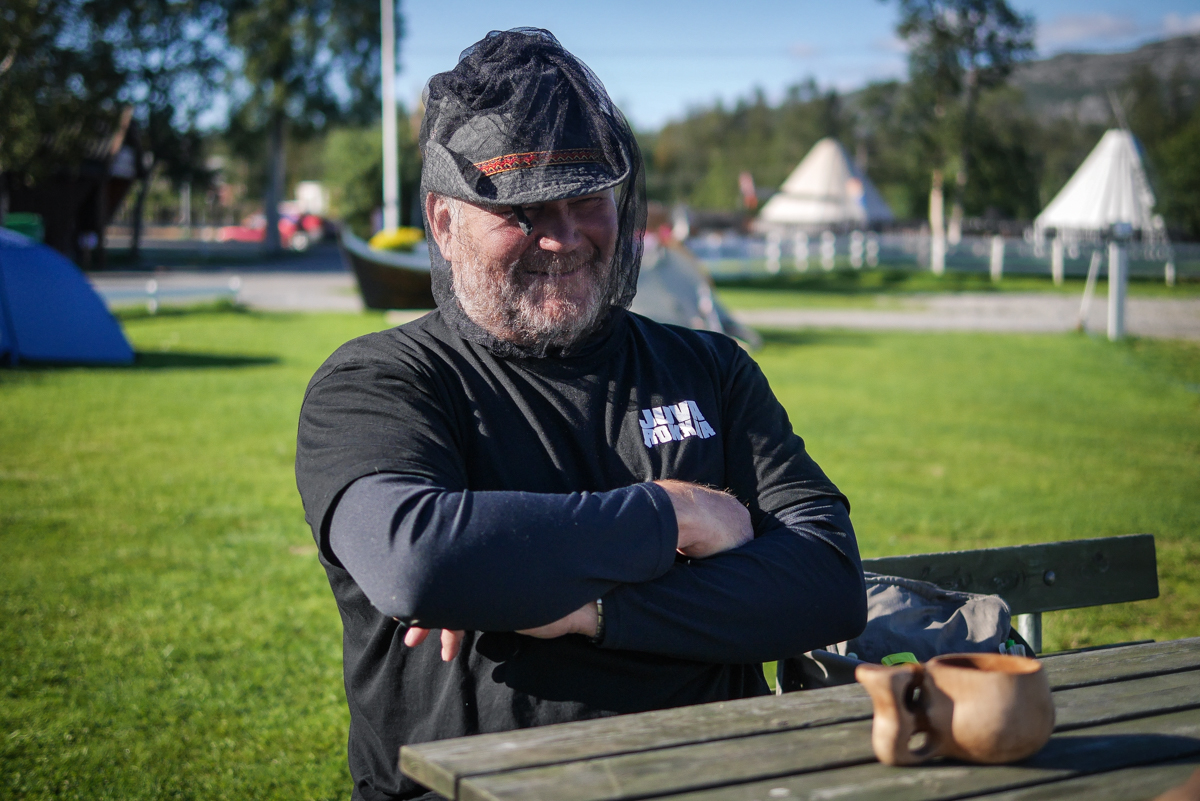 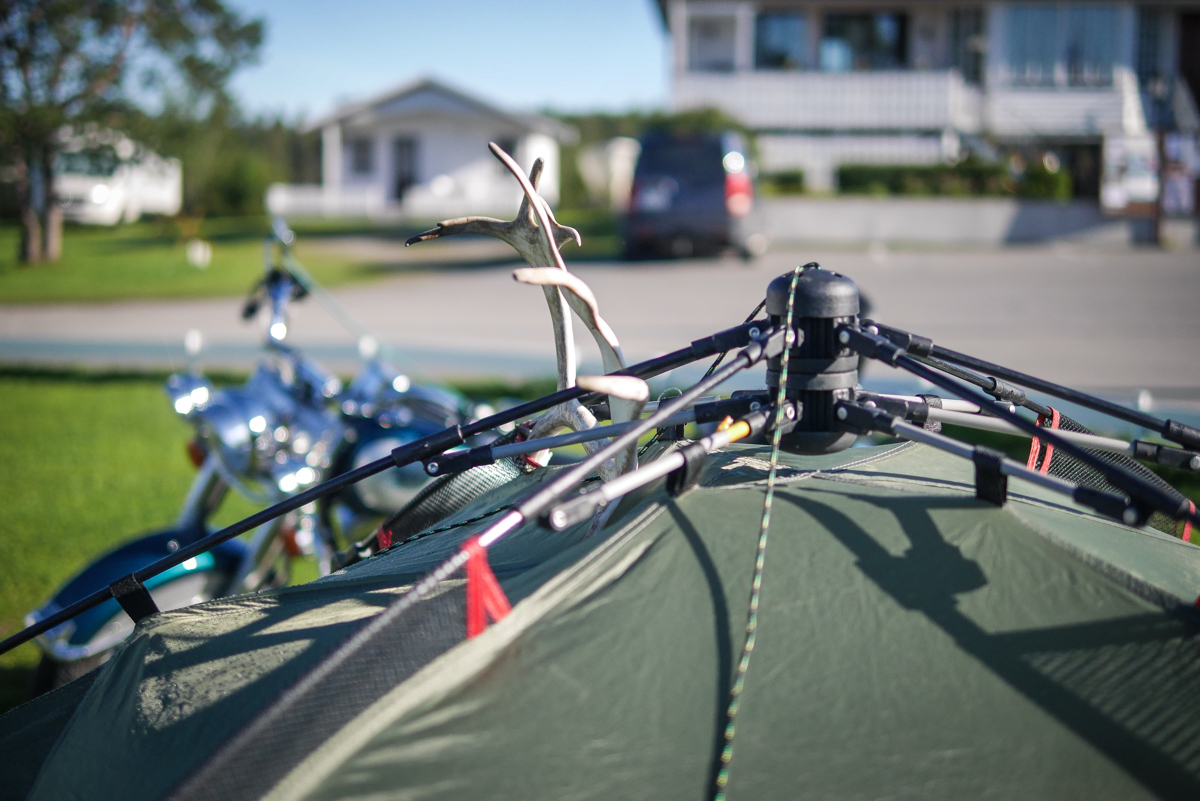 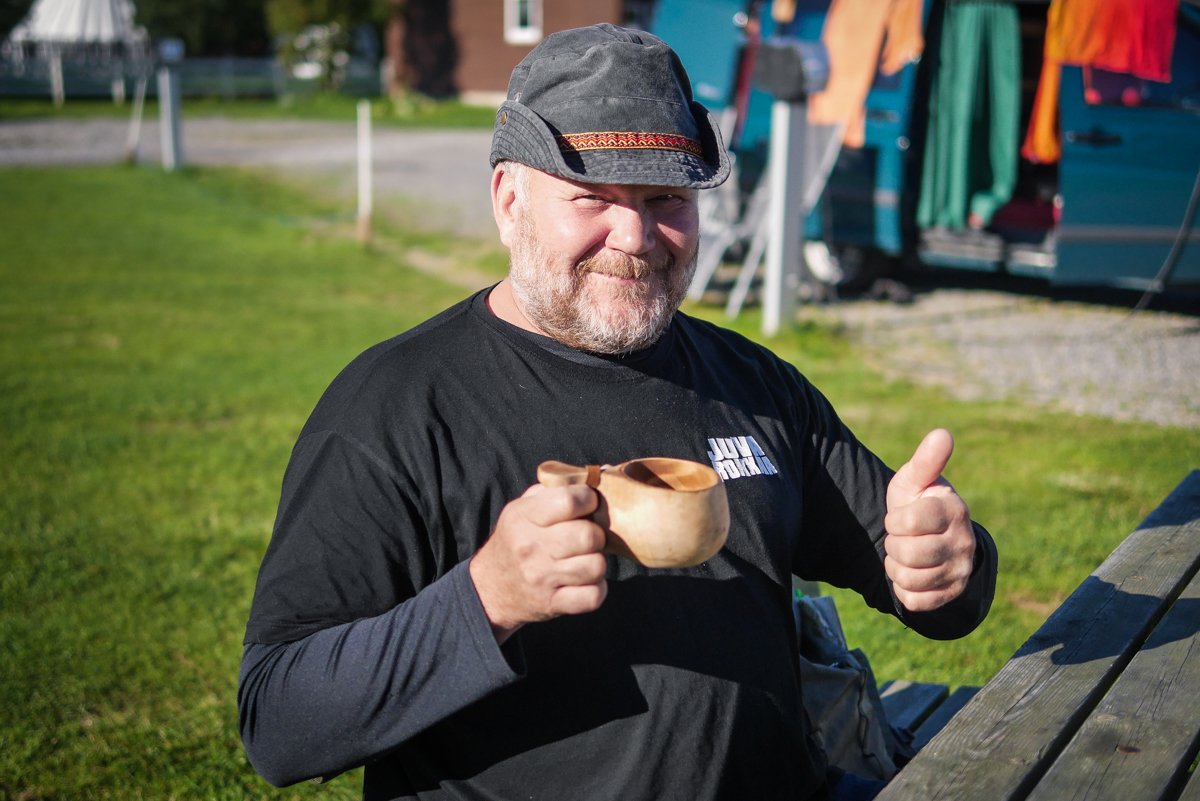